This post is part of my 10-Minute Tuesday series. Today the prompt is “osmosis.” Let’s see what I can do with that. 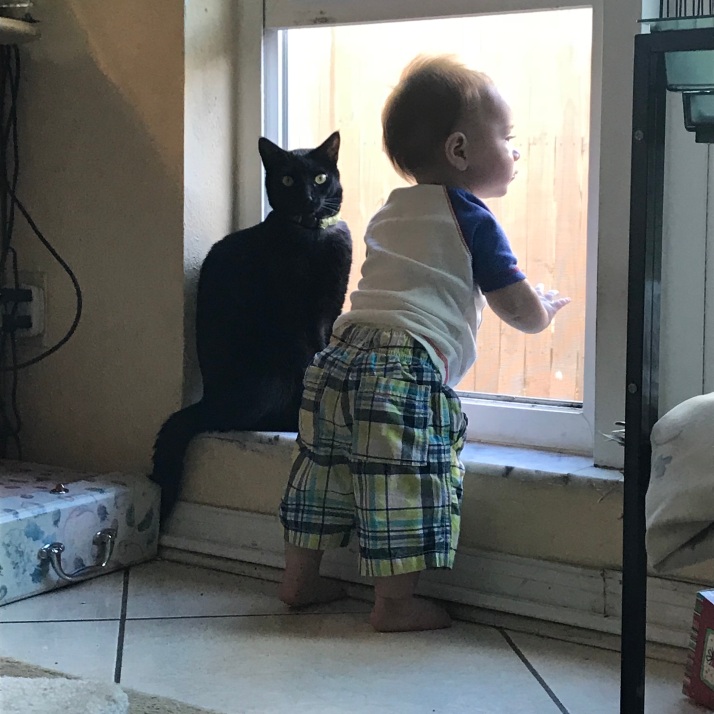 My 11-month-old grandson is getting about by himself these days, so we’re having to be more vigilant in the hours that we take care of him. One of the things he loves to do is check on our parakeets in their cage. And by “checking” I mean banging repeatedly on the side and squealing when they move about.

I know that loud noises like that are not good for the birds, so I am constantly having to tell him to be gentle. But I know that just saying “gentle” isn’t going to get the point across since he doesn’t know what the word means. So I take his hand and put it softly on the side of the cage while saying, “Gentle, Zayne, you need to be gentle with the birdies.”

As soon as I remove my hand, bang! bang! bang! He’s at it again. So I need to move him from near the cage to some other activity.

The same goes with the cats. One of his favorite things to do is put his head down on their soft fur and stick his thumb in his mouth, using them as living pillows. Again, we say, “be gentle, Zayne,” but we also know that the cats have the ability to run away if they’re not happy with how they’re being treated.

I know, though, that I can’t just sit on the couch and tell Zayne to be gentle. He’s not going to get the idea simply through osmosis. His learning is going to have to be hands on training. So I sit with him and guide him, knowing that at just 11 months old, he’s not going to completely grasp the concepts I’m trying to teach him. It will take time.

But we can go through a lot of parenting that way. If we say it often enough, our kids will just get it. Somehow, their brains will be able to assimilate the information simply by hearing it over and over.

“You need to show more respect!”

I asked my 19-year-old the other day when we were playing with Zayne if he remembered everything he didn’t know when he was Zayne’s age. Obviously, the question was not serious, and his answer of, “Um, I don’t think that’s how it works,” acknowledged that, but the point remains. Unless we are training our children, they’re not just going to suddenly understand what we mean.

We see that every day with Zayne, and we need to understand that others in our world—and we ourselves—don’t simply learn by osmosis, but by hands-on, down-on-the-floor with them training.

After all, haven’t we always heard that actions speak louder than words?

What do you think? Cancel reply

Tim's Blog - Just One Train Wreck After Another

further up + further in

The story of an adventurous soul

Tales from the Mama Duck

My great Wordpress blog
Coming Up For Air

Life Through the Big Screen

A podcast where I invite guests from all walks of life to discuss their favorite movies, and we use that film as a starting point to talk about deeper issues such as faith, politics, and social issues.

Thoughts from a Christian Mother

What Kids Are Reading

and what we wish they were

Prego and the Loon

Pregnant and Dealing With Domestic Violence

Glimpses into my journey