This post is a part of the Five Minute Friday link up. We write for just 5 minutes (I cheated a little today) on a one-word prompt, without heavy editing, and see what happens. Today’s prompt is “active.”

“For the word of God is living and active, sharper than any two-edged sword, piercing to the division of soul and of spirit, of joints and of marrow, and discerning the thoughts and intentions of the heart” (Hebrews 4:12 ESV).

For more than 30 years, my husband has worked for a ministry called The JESUS Film Project. The movie “JESUS,” taken from the book of Luke, is dubbed into all the major languages of the world, and lots of minor languages as well. The thinking is simple: No one should have to learn another language to understand that God loves them.

For many years the ministry has worked alongside Wycliffe Bible Translators to get Luke translated first so that the movie can then be dubbed into that language and the people can hear and see the story of Jesus in their heart language. (Learn more about it here.)

Lately, I have had the privilege of working in two areas that are helping people hear and understand the Word of God. The first is called her.Bible. This is a project that seeks to record an audio Bible with diverse women’s voices. The producer of this project realized that there was a silent space when it came to audio Bibles in women’s voices. her.Bible has produced the entire New Testament and the books of 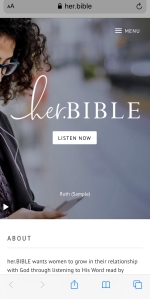 Proverbs, Ruth and Esther in the Old Testament. They are now seeking funding to be able to continue recording the rest of the Old Testament. My role is to make sure that the recordings are word perfect to the New Living Translation of the Bible. Check out her.Bible here.

The other work I’ve been doing is with a Christian meditation app called Abide. It is the #1 Christian meditation app and has been helping thousands and thousands of people worldwide to meditate on God’s Word, hiding it in their hearts and growing in their faith because of it. I am writing daily meditations and bedtime stories to help people get peaceful sleep, and helping in the editing and planning processes. Oh, and they also have a YouTube channel!

The app is free for the shorter versions of the meditations, and costs less than 11 cents a day for the full version. Learn more about it here and by checking it out in the Google Play or Apple app stores.

The Word of God is active. It is living. It does not return void. Everything that we can do to get His Word into the hands, hearts and ears of people is worth the investment of time and money. The JESUS Film Project has an app, Abide is an app, and her.Bible is working on an app. Won’t you go and check them out? Have questions? Put them in the comments.

Like Loading...
“For the word of God is living and active. Sharper than any double‑edged sword, it penetrates even to dividing soul and spirit, joints and marrow; it judges the thoughts and attitudes of the heart (Hebrews 4:12 NIV84)

In the past, I’ve always struggled to have consistent times in God’s Word. I’m not a morning person, and my days always got away from me. Then along came this little thing called an iPhone, and an app called the YouVersion Bible.

I have a clock dock by my bed where I keep my iPhone charging over night. In the mornings it wakes me up with a random song from my “God Songs” playlist. I set that alarm to go off a half hour earlier than I need to get up and get the kids going. After one song plays, I grab my phone, open the YouVersion app and read the devotional for the day.

After two years, this is now an ingrained habit. I love using my iPhone because I don’t have to turn on the light. The praise song focuses my heart and the devotional is short and sweet and gets me thinking about living right. And it has me writing on a regular basis: I chronicle my thoughts from the devotional and then post them here.

After two years of reading through the Bible in two different ways, I feel I have a clearer understanding of this rich, vibrant Book that shows me God’s heart. After this year, I might do that again with some other plan just to get another perspective.

If you’ve never read through the Bible completely, I highly recommend it. You might be surprised what you’ll find.