A call from her husband at 11:45 p.m. went unanswered as my phone was on “do not disturb” and my husband let the call go to voicemail. When our son, friends of their eldest daughter, came in moments later and told us to check our messages, Julie had been in an accident, I didn’t even know what to expect.

My husband pulled on clothes and rushed to get her husband and go to the accident site as the vehicle she was driving was their only multi-passenger vehicle and he needed a ride there and a way to get them all home.

The images here are what she shared with us that night and the next morning.

But for the grace of God, Julie and her twin daughters would have been impaled by a guardrail into which their minivan was pushed by a reckless driver trying to squeeze in between their van and another vehicle in the next lane. His selfish action nearly cost the lives of 2 beautiful teenagers and their mom, grieving a husband, 2 other kids and numerous friends and family members in the process.

When I see the damage done to their van, I know that it is only by God’s hand that they survived with barely a scratch. They are sore, and Julie thinks the rail must have skimmed her head because she has bruises in a couple of places. But they walked away, glass encrusted hair bearing witness to the horrendous mess made of their vehicle. 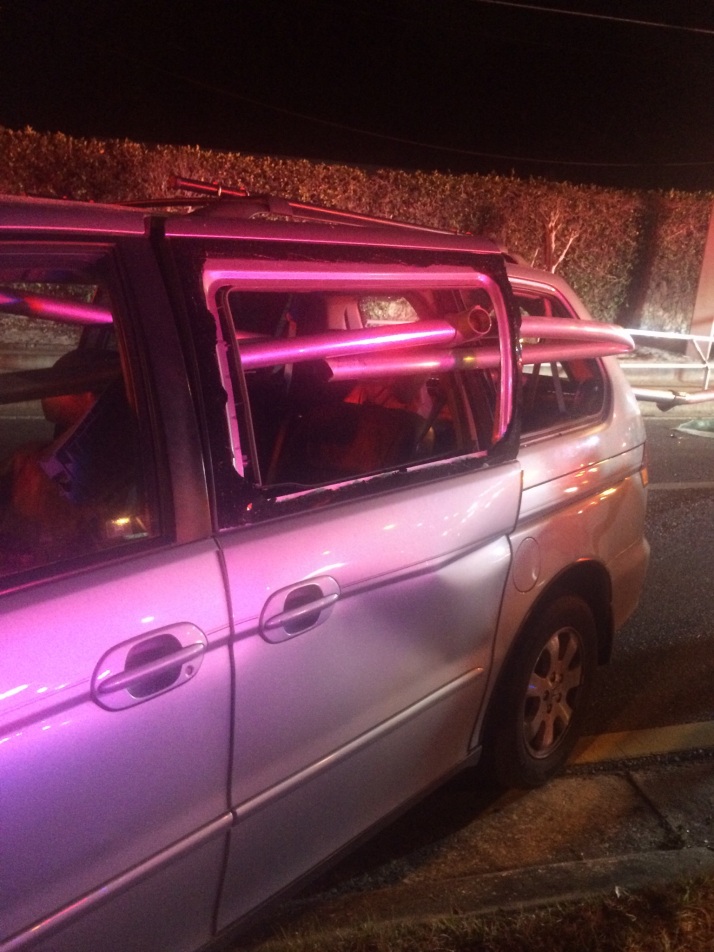 One of the girls was sitting in the back on this side of the van.

When they awoke the next morning, Julie was glad just to be alive. When one of her kids noted that they were out of coffee creamer, her response was, “Isn’t it nice to be out of creamer?”

In texts between a group of friends, she noted, “I cannot begin to convey how thankful I am to God and that waking up this morning, it was a very ordinary day when it could have so easily not been ordinary. We three are pretty sore understandably. But so thankful for so much. I told the girls that we will never have a bad day again, they’re all good days from here on out!”

Later she texted, “My words are too few and not nearly as adequate as I would like. It’s been very humbling that God would choose to save us in this way.”

Another in our text group said, “I’m so glad we are texting rather than crying over caskets!” Wow. That hit me hard and I just wept. What caused one daughter to duck when her sister in the front screamed, thus causing the deadly missile to miss her by inches? How was Julie not decapitated by the force of the pole through their windshield so close to her head? 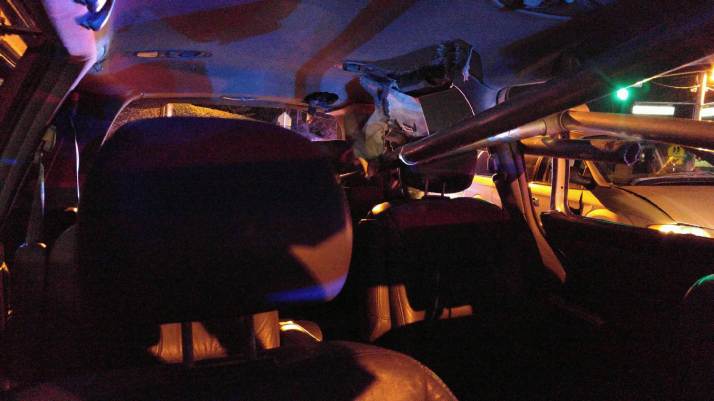 How fleeting life is. Sometimes we don’t think about it. We just go about our business assuming we’re going to see our loved ones later. But sometimes they don’t come home.

But God is still good. Circumstances don’t change that. I am thankful for the lives that were saved last Friday night. Had things been different, I can’t even imagine what this next week would look like. Mother’s Day would have felt very different. Graduation just days away would be a wrenching event instead of a celebration for the senior daughter. Every “last” for that senior is more precious when Julie thinks how differently things could have turned out.

For this time we can breathe a sigh of relief and thank God that He spared them. But we know that not everyone can do that. Lives are lost every single day in tragic accidents caused by foolish people.

Take nothing for granted, except that God is good.

Although I haven’t touched them for nearly two years, I am a scrapbooker. Once I began teaching, I just haven’t been able to save any mental space for working on my books. I’ll get back to them some day. But this was a quote I put in one of the early books for my kids:

“You are the trip I did not take;

You are the pearls I cannot buy;

You are my blue Italian lake;

You are my piece of foreign sky.”

This is from a poem by Anne Campbell. It speaks to me.

Motherhood, it seems, is all about sacrifice. Of course there are benefits, but often those don’t come until later. My friend Judy posted a poignant blog about the gifts her children have given her (read it here). I agree with every one of her points, although my life looks vastly different from hers. My kids are all still at home. Every day there is something that goes on that means I have to give up something that I would rather be doing. And yet, in raising my kids, there really is nothing that I would rather be doing.

Do I enjoy the silence in the house when they’re all off to school? Yes. But if the continued silence means I didn’t have the kids, I far prefer the chaos.

Do I wish that for even a day the house could stay clean? Yes. But if cleanliness meant my house was empty, then what’s a few dust bunnies? (OK, more than a few.)

Would I like to look out on a pristine yard? Who wouldn’t? But if nice grass meant no wild sword fights or games of fetch with the dog, then I welcome the lived-in look of the warn path the dog has made madly chasing his beloved ball.

My friend Ronnie once told me a house should be clean enough to be healthy and dirty enough to be happy. I have taken that on as my personal slogan.

Do I pester my kids about picking up and quieting down? Yes. But honestly, what would I do without them? They are my true Mother’s Day gift.

But I’m still looking forward to that steak dinner promised to me tomorrow.

270. the gift of See’s chocolate from my friend Lynn

271. waking up early on a day I could have slept in

273. a great first year of high school for my eldest

274. the cardinal couple that occasionally flits through our yard

275. that the alligators decide to wait until after our day in the lake to make their appearance

276. the pitter patter of little feet (and some not so little anymore)